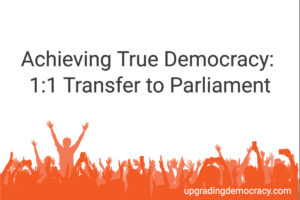 This is part 8 of my “Achieving True Democracy: A New Breed of Party as Realistic Next Step” articles.

Here you can find part 1, the introduction for the article series, and part2, a short description of the idea of the Proxy Party, and part 3, a description of how a party program should look like, and part 4 about finding, prioritizing, and voting on topics, and part 5 about going beyond ‘simple’ direct democracy, and part 6 about efficiency and effectiveness, and part 7 about safeguarded information processes and decision processes.

In rare cases, the political leadership of a typical party doesn’t decide on its own but hands the vote to the member base, the majority will decide about the voting behavior of their representatives in parliament. Even if 49% of the members vote against a petition, all their representatives will still vote for it. This might even increase well above 50% when the party leader insists and threatens to resign if the party doesn’t vote accordingly.

One major reason why the command style works well is the re-election process for the representatives. This is heavily dependent on the good-will of the party leaders influencing or even directly deciding about the list position of the candidate in the next election.

In my opinion, this process misses the point of democracy itself. Democracy has to represent the people and not their political parties. Artificially aggregating the will of its members at the intermediate step of a party to a 100% YES/NO-vote results in a loss of information and distortion of the political will and makes the party more vulnerable to corruption.

Members of political parties are individuals with individual minds and will not agree on all political issues. This is only possible in a ‘one topic party’ e.g. one aiming to install a Universal Basic Income (UBI). If you talk to these guys, you will see that even this group with a very narrow focus doesn’t agree on how a UBI should look like.

The Proxy Party should aim to represent the will of its members as well as it can. If 80% of its members vote YES and 20% with NO, eight of 10 representatives should vote for YES in parliament and two with NO.

Some drawbacks would be:

But would it be so hard to communicate again and again that the aim of the party is not to vote against the will of a sizable part of the members but truly represent all of them? But would it be so hard to tell the coalition partner that just the projects that convince your member base will get their consent? Sure, a decision from the top is easier, but surely not more democratic.