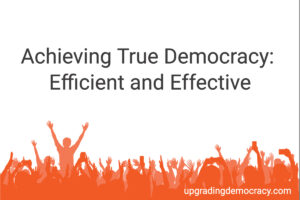 This is part 6 of my “Achieving True Democracy: A New Breed of Party as Realistic Next Step” articles.

Here you can find part 1, the introduction for the article series, and part2, a short description of the idea of the Proxy Party, and part 3, a description of how a party program should look like, and part 4 about finding, prioritizing, and voting on topics, and part 5 about going beyond ‘simple’ direct democracy.

A grassroots democratic political party is not an end in itself. Its main purpose is to act on behalf of its members and to bring about political decisions in their interests. To be successful in this endeavor, it has to be effective (doing the right things) and efficient (doing the things right).

I argue that a Proxy Party is more effective than the conventional political parties if it:

The grassroots democratic Proxy Party will aim at a 1:1 representation of its members by transferring the party’s internal votes to parliament. It enables its members to propose topics, rank them, take topics in their own hands and decide about them themselves:

Anyone who has ever dealt with the strengths and weaknesses of our thinking knows that we humans have two kinds of thinking. This is described by the Nobel Prize winner for economics, Daniel Kahneman, in his book Thinking, Fast and Slow.

The book states, during evolution, humans developed a strategy in which most of the decisions of the day are made without much thinking. We just use proven shortcuts. This ‘fast-thinking,’ is however very susceptible and is subject to many cognitive biases that can be used for manipulation. In political decision-making, the most important thing is not to let the voter decide ‘from the gut.’ Instead, he must know the facts and be motivated to deal with them. He should be motivated to ‘think slow’ and will then have a good basis for his decision.

In doing so, the Proxy Party relies on science in the sense of a quotation from Dieter Nuhr, German comedian, to determine the facts:

“Knowledge does not mean that you are 100% sure, but that you have enough facts to have a well-founded opinion. Because many people are offended when scientists change their mind: No, no! That is normal! Science is just THAT the opinion changes when the facts change. Because science is not a doctrine of salvation, not a religion that proclaims absolute truths. And those who constantly shout, ‘Follow science!’ have obviously not understood this. Science does not know everything, but it is the only reasonable knowledge base we have. That is why it is so important.”

The Proxy Party is a neutral facilitator for the forming of the political will of its members and all citizens. It tries to enable well-informed decisions by providing relevant, well-balanced, checked data and provide systems and an environment in which respectful deliberation with a focus on common ground can take place.

Instead of manipulating its members and all citizens with very one-sided selected facts, misleading statistics, etc., it will simply show the situation as it is, as well-balanced as possible, and let its members decide on their own.  The Proxy Party will enable its members to find their educated will and thus will far better represent its members than any existing party.

Being theoretically effective doesn’t help when the Proxy Party is majorly occupied with itself like many other grassroots democratic organizations. It also has to focus on efficiency. In the end, it will be judged by its achievements and not by its potential and lofty goals.

Therefore, it is important to agree on rules that will enable the party’s officials and representatives to act efficiently on behalf of its members without sacrificing the effectiveness of representation.

THINGS THE MEMBERS SHOULD DIRECTLY VOTE ON

I see two things the members should definitely vote on directly:

The party program is the most fundamental building block to decide. It should be decided on by all members. It sets common values and ensures common goals. This is the only decision that the members have to take themselves and can’t delegate.

The election of party internal posts has to be also voted on by its members. Here I see a delegation of votes as a good option as members who have personally met certain candidates will have a better base for a good decision.

The election of candidates on city, district, regional, state, and county levels has to be also voted on by its local members. This determines the direct candidates as well as the list candidates and their positions on the party list. Here I also see a delegation of votes as a good option.

In the election of persons, a ranking procedure should be followed, in which the voter arranges the candidates in the order of his preference (‘ranked-choice voting’). The candidate with the fewest points is eliminated and his share of the vote is distributed among the second candidates of the voters who voted for him as first candidate, etc.

A simple YES/NO-vote should be replaced by a more sophisticated vote for each candidate. Alternatively, you could provide the following scale for each candidate/ solution: strong rejection/rejection/neutral/approval/strong approval) with the values -3/-1/0/+1/+3. The winner/ winning solution will be determined by adding up the total number of points.

For all ‘officials’ of the proxy party, e.g. board of directors or spokesperson, a proxy party internal survey is conducted every two months. Here two values are asked:

For the answer to the first question the following answers can be selected: very negative/ negative/ neutral/ positive/ very positive) with the values -3/ -1/ 0/ +1 / +3. For the answer to the second question the following answers can be selected: has done much harm/ has done harm/ neutral/ has not done harm. If the first value falls below zero, a survey is automatically started, asking all members whether the official should still remain in office. If the second value rises above one, then such a poll is also triggered.

5% TAKE OVER VOTE AND LIQUID DEMOCRACY

It is obvious: If the party insists that all members take all decisions at the member base, it will fail. By trying this approach, the active members will be overloaded and will eventually burn out and decisions will be taken too late or will be ill-prepared. Most likely, this approach will achieve all of these results.

My suggestion would be to combine the best of both worlds:

The party officials would be guided by the descriptive party program. If the candidates are picked correctly and guided by a well-written program, they could decide on their own on how to vote in parliament. They would act like normal representatives.

However, the representatives would have to announce their voting decision to the members in time to give them a chance to interfere. All members are allowed to initiate a ‘takeover vote’ that, if successful, would take the decision out of the hands of the representatives and in the hands of the members and initiate the official fact gathering and deliberation process at the member level. The takeover vote needs to pass a qualifying 5% of all members incl. delegated votes (see below ‘liquid democracy’).

The concept of ‘liquid democracy’ allows for the flexible, short-term and topic-specific transfer of votes (‘delegated votes’) to a person/group who/that is believed to have expertise on a topic or a similar attitude to one’s own and is therefore suitable to represent the voter.

The specialist committees also have the right to kick-off decisions taken at the member basis without a take-over vote by the members. This could be relevant if there is any doubt as to whether a sufficiently secured decision can be made.

In both cases, the importance of these topics (and the time to be spent on them) will be determined by the members and the qualified volunteer power for the preparation of these topics.

The proposed system would be very flexible:

Topics that have not yet been prepared pose a challenge. For these, there is not yet a sound basis for a decision that would enable the members to prepare themselves quickly and well balanced. A distinction must be made here:

Not every topic is equally important. Especially at the beginning, a not clear-cut thematic focus leads to a dilution of the focus and the profile of the party. This would lead to a decrease in the quality of the work. If the party develops the ambition to work on far more topics, then it will be important to attract many specialists and active members to prepare and discuss these topics, slowly increasing the number and the breadth of topics covered by the party.

It may be that the 5% approach to the takeover vote of the members is too high or too low. If it is chosen too low, it can lead to a flood of votes and thus to an overload of members. If it is set too high, too many approaches fail to carry out topic voting at the member level. Therefore, a paragraph should be established in the party’s statutes which stipulates that the level of the 5% percentage hurdle must be voted on every six months. This can be done within the framework of a permanent general meeting. All the members can regularly consider whether the party officials and the members use their rights wisely or whether this percentage should be amended.

The Proxy Party might not be effective when loud voices with very articulate opinions drown gentler voices with facts and knowledge. It is also counterproductive to start discussions before having facts. It is especially counterproductive if certain facts are not allowed to be mentioned as it would be ‘politically incorrect.’

“Political correctness is fascism pretending to be manners.”

This is, of course, somewhat pointed, but it is at least 80% true since most of the current exaggerations do not allow for differentiation and are not accessible to logical arguments. Solutions must take precedence over sensitivities. Blocking facts mostly results in blocking potential solutions.

The party needs to find a way to attract experts to join the party or at least support the party with their knowledge in the fact-finding and deliberation phase.