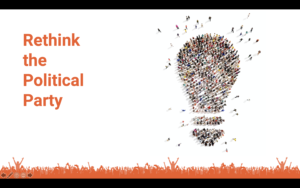 Politics doesn’t represent the majority of the People. Public opinion and public policy differ, sometimes a lot. Even if an overwhelming majority is clearly in favor of a certain policy it doesn’t mean that this will translate to legislative action in parliament.

A ‘good’ example are the two US-parties locked in a partisan death spiral. Without them, the US population could easily agree on dozens of issues listed in the article What if a Presidential Candidate Ran on What Most Americans Actually Wanted.

An American study has shown that “when preferences of low- or middle-income Americans diverge from those of the affluent, there is virtually no relationship between policy outcomes and the desires of less advantaged groups.” A German study revealed very similar results.

Whenever we try to break this cycle and go the direct way and get a new party elected into parliament, we recognize that this is very hard. The political rules are set up against new political parties. Yet when we succeed, this new party seems to warp into the same stuff that our established parties are made from.

Whenever we try this indirectly and put pressure on them via NGOs and other groups, we recognize that this is very hard. Of the issues that are neglected by our politicians, there are only a few that we can take forward. For every hard-earned victory, there seem to be 10 additional things that someone should fight for. We simply lag the time and resources to keep up with all of the new laws and regulations we are bombarded with or the topics neglected by our politicians.

Slowly but surely, democracy itself is losing ground

Actually, in times of COVID-19, we lose ground fast. The speed of dismantling basic rights that we thought sacrosanct is breathtaking. Authoritarian regulations have grown fast in the shadow of 9–11 and now make a great leap forward and put civil rights and democracy itself at risk. The ‘pandemic shock doctrine’ works well and seems to keep most of the world’s citizens in a Stockholm syndrome light.

Democracy itself and its institutions are at risk

Because of the work of these political parties over decades, trust in politics, in democratic institutions, and in democracy itself is at an all-time low. The Global Satisfaction with Democracy Report 2020 shows a 57.5% share of dissatisfied people in 2020. And it is this trust on which our civilization is ultimately built.

It is time to upgrade democracy

Yes, it is true: most political systems worldwide are rigged and not constructed to represent the majority.

But the solution is not to replace democracy with a strong man and destroy democratic institutions. Instead, we have to find a lever and fix and improve our democratic system and institutions.

This short book focusses on the parliamentarian realm. It outlines a solution to actively create what we need: a people’s champion in parliament who truly speaks for them and cannot be bought by big money.

To be able to achieve this, we must rethink the very concept of the political party as a vehicle for representing democratic interests.

This breed type of grassroots democratic party will effectively and efficiently…

… focus on bringing real democracy and transparency,
… ensure and proof that its internal democratic processes are kept,
… use well-balanced facts instead of manipulative inputs,
… focus on common ground to advance the public good,
… give its members the decision and
… focus on the 1:1 representation of its members.

This new breed of party not only (largely) solves the problem of our representation crisis, but also offers solutions to other problems of representative democracy:

All of this sounds too lofty and too good to be true?

I can assure you, that this new breed of party is not only thinkable but also implementable in the current political system.