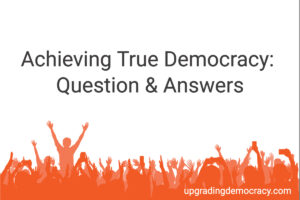 This is part 9 of my “Achieving True Democracy: A New Breed of Party as Realistic Next Step” articles.

Here you can find part 1, the introduction for the article series, and part2, a short description of the idea of the Proxy Party, and part 3, a description of how a party program should look like, and part 4 about finding, prioritizing, and voting on topics, and part 5 about going beyond ‘simple’ direct democracy, and part 6 about efficiency and effectiveness, and part 7 about safeguarded information processes and decision processes, and part 8 about a 1:1 transfer to parliament.

How does the Proxy Party differ from a normal party?

…is organized on the basis of grassroots democracy and also includes the most important right of the member of parliament (the voting right).

…obliges the elected representative to vote as determined by the party base.

…does not ignore the dissenting votes of its members but reflects their will in the vote.

…is, therefore, more relaxed in the internal discussion, since it is not a question of necessarily having to achieve a 50% majority.

…is focused on safeguarding the democratic processes and information processes within the party.

…will check facts or at least evaluate their basis.

…approaches a topic without ideological blinders.

…is focused on finding common ground and developing concrete, effective, and sustainable solutions.

…is focused on the internal discussion and the increase in knowledge for the participants.

…uses thematic summaries to inform everyone well-balanced about the most important facets of a subject area.

…is transparent and committed to extending this transparency to the entire political arena and all public institutions.

… is the ‘democratic champion’ in parliament and is relentlessly committed to the further development of democracy and the strengthening of its institutions.

But this is not a direct democracy, because only the party members are allowed to participate

The next stage of the democracy upgrade, the creation of a proxy party to represent its members, does not yet include the general introduction of direct democracy. Only the members of the party can have a say in how their representatives vote. Apart from the members, only experts are invited to give input on individual issues.

However, the proxy party will work to ensure that representative democracy is complemented by direct democratic elements with decision power. In the longer term, it may decide to strive for the introduction of a general direct democracy.

Of course, it would also be conceivable to extend the voting basis to the entire population. This would come very close to the introduction of direct democracy. The systems would only have to be accessible for the entire population accordingly. However, this approach has decisive disadvantages:

By restricting voting rights to members of the proxy party, a positive self-selection of politically interested people is achieved. They are far more interested in politics itself and in active participation than the average population. They inform themselves more intensively about voting issues and are therefore able to make better decisions.

A different solution for creating the Party Program

The German Initiative “Basisdemokratie Jetzt!” (Grassroots Democracy Now!) offers a different approach. It aims to unite all smaller German democratic political parties under an ‘umbrella party’ making it more achievable to reach the 5% election outcome which is set as a hurdle for seats in parliaments. Each party can decide from election to election on the local/regional/state/country level if it wants to run under the flag of the umbrella party or under its own flag. In case of a successful election, the parliamentary seats and the state subsidies are allocated to the participating parties.

To achieve the widest basis of agreement for a party program for this umbrella party, the approach ‘simply’ combines the existing party programs. When comparing the different parties’ programs, the picture roughly looks like the following:

In reality, the wording for the 60% will still have to be discussed, the added 30% will also have to make sense for the other parties, and the 10% might mean that a party will choose not to join.

According to the founder Günther Ziethoff, the major advantage of this organic approach is that “the new program is a natural merge of the existing programs and easier to agree on for the members of the participating political parties.”

It is very positive that the different approaches to problem-solving as a basis for discussion lead to a cross-party political opinion-forming process.

The difficulty with this approach lies in the distribution of successes, since it will be very difficult to determine the share of success each small party had in the overall success of the umbrella party. However, the founder Günther Ziethoff has also developed a model for this that includes voter stars, top candidates of each party and a proportional distribution.

A potential disadvantage is that the parties might not be incentivized to fully discuss the urgently required structural changes for politics and its laws and rules as a precondition for better representation and fairer rules. Even if one party brings this deep analysis and solutions to the merged program with its party program, it seems to be seen if the other parties’ members will intensively discuss these topics and stand behind them.

Another possible disadvantage is that small parties that do not accept the so-called ‘code of ethics’ or the common ‘fundamental values’ are perceived as ‘undemocratic’ and are therefore not allowed to participate. However, this can also be an advantage due to the resulting internal lower friction within the umbrella party.

Why isn’t it enough to vote for individual proxy members?

The alternative to the Proxy Party would be individual candidates who see themselves as directly elected Proxy Representatives. They would be normally elected as direct candidates and would vote exactly as their voters determine.

In the US, there are already candidates who have promised to behave in elections as determined by their voters through a platform such as united.vote [1] or other digital platforms. [2] One of them is David Ernst. [3] The book Architecture of a Technodemocracy outlines a framework for a democracy based on individual candidates.

At first glance, these directly elected individual proxy candidates are a good idea. They correspond to the ideal of direct democracy. But this direct election has some disadvantages that majorly result from the current state of the political system:

Does the idea of the Proxy Party work for countries with a two-party-system like the US and UK?

According to a 2018 poll, 57% of Americans judged the Republican and Democratic parties to do such a poor job that a third major party is needed.[4] So there seems to be a justification for a third party to exist.

But at first glance, it doesn’t look pretty for a third party. Voting for third party candidates often means that you ‘waste your vote’. Your candidate stands no chance against the candidates of the larger parties. In the US presidential election, this means not giving the ‘party you dislike less’ your vote, which might lead to your ‘worst choice’ being elected. As already described, this leads to a ‘tactical vote’ and heavily favors the two large parties and their candidates.

But what if the 42% of American voters registered as independent [5] would see a real chance for a new start? A fresh start with a new party really representing them and not the 0.05% spending more than $10,000 in political campaigns.

If you widen your view you can see the full picture that politicians don’t like to mention:

But why does this large group choose not to vote? Three primary reasons:

But what if those non-voters:

…would recognize that the new type of party is their only chance for a real democracy?

…would see a real chance not to ‘waste’ their votes because ranked-choice got introduced so that they can safely vote for their real preference and not strategically?

…would know that the election of the new party puts power in their hands?

…vote two thirds in favor of the new party?

…would half vote for the new party, along with some other voters who are tired of the established parties?

What if a new US party would choose to run on what most Americans actually want, like the more than 40 topics listed in the ARC article from Renae Marshall?[8]

“One of the many people who live in a State or a District where your vote has never made a difference? Join the Liquid Democracy Party and as long as we have at least one representative from somewhere — you have regained some portion of your sovereignty.”[9]

What about the cooperation between Proxy Parties of different nations?

Because it works fact-based and outcome focused, the Proxy Party is always interested in working with partners who can reliably support it in collecting and checking facts. It will be happy to work with other Proxy Parties on a national and international level, because they have committed themselves to similar ground rules.

The cooperation with other proxy parties is useful in many areas, among others an exchange of information …

… about secured facts and fact checks for topics for the preparation of discussions and decisions (incl. successively building a solid knowledge base)

… on the experience of parties from other countries in implementing policies, and their actual costs and effects.

… on the experiences with different inner-party processes etc.

This model would offer a far more cooperative and efficient alternative to the current political system. This will enable better cooperation between nations in the medium term, which is urgently needed in order to successfully tackle common problems.

Is the Proxy Party the best option for democracy?

In my opinion, the proxy party is just the best option that can be implemented as the next step in the current situation. The Proxy Party is only an intermediate stage in the development of democracy.

How the next step will look like, will mainly depend on the popularity of the Proxy Party or similar basic democratic models and their experiences. As an inspiration, I would like to refer to the bottom-up approach of Klaas Mensaert’s ‘inclusive party’. This would completely dissolve the current party oligopoly, provide us with an anti-fragile democratic system, greatly reduce the current polarization and allow for better cooperation. In his book The Flaws that Kill Our Democracy, he argues well why the current approach of ‘exclusive parties’ leads to polarization, a large accumulation of power, little innovation and instability of the entire political system. The two main components of his approach are: