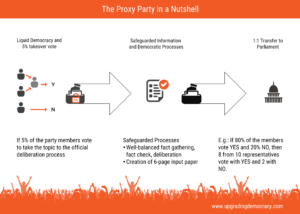 Politics doesn’t represent the majority of the People. Even if an overwhelming majority is clearly in favor of a certain policy it doesn’t mean that this will translate to legislative action in parliament.

An American study has shown that “when preferences of low- or middle-income Americans diverge from those of the affluent, there is virtually no relationship between policy outcomes and the desires of less advantaged groups.”[1] A German study revealed similar results.

Some reasons for this disparity are:

It is time to Upgrade Democracy!

What can be done to gain a real say in politics and achieve a more effective democracy?
How can this be achieved within the current political systems?

In my view we need a new parliamentary champion.

The Proxy Party in a Nutshell

We need a different breed of political party: A proxy party:

A new Chance for Democracy

A great democracy has got to be progressive
or it will soon too cease to be great or a democracy.”

What could a party achieve that is truly focused on representing its members as a true grassroots democracy – one that is efficient and transparent?

If you are fascinated by this idea you will be interested in reading my book “Upgrading Democracy: Claiming a Say to achieve True Democracy” that will come out by December 3rd. The reduced pre-order price is $2.99/€2.99.