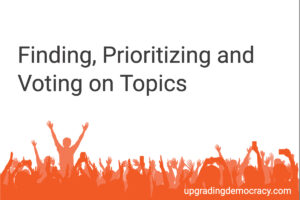 This is part 4 of my “Achieving True Democracy: A New Breed of Party as Realistic Next Step” articles. Here you can find part 1, the introduction for the article series, and part2, a short description of the idea of the Proxy Party, and part 3, a description of how a party program should look like.

The Proxy Party focuses on designing and securing party-internal information processes and democratic processes effectively and efficiently and implementing the results developed in the processes:

Important points of the content-related work are above all to:

1. Input of topics by individual members on the basis of a two-page-template form (“Why is the topic important?”) including a half-page abstract. These must receive a minimum number of votes (e.g. 60%) in a member preliminary vote of less than 1% randomly selected members (but at least 50 members). If a member does not respond within a certain period of time, he will be replaced by an alternate member. Instead of a simple yes/no alternative, a different point system is used. Example: Five rating options “completely unimportant” (0%)/“not important” (25%)/“somehow important” (50%)/“important” (75%)/“very important” (100%).  Potentially, the metric of importance can be split into two dimensions: ‘importance’ and ‘urgency.’

A good preparation for the topic is very important. If the topic is well described and logically structured, many members will decide in favor of dealing with it and will proceed in the process. In order to reduce the expected flood of topics and increase their quality, a topic is not allowed to be submitted for voting without an initial preparation/ stage of maturity. If a member is not able to prepare the topic, he can search for and win other members for the preparation on the platform of the party.

In the founding and initial phase of the Proxy Party, it is advisable to focus on two core issues of the party: ‘democracy’ and ‘transparency.’ This can quickly create a well-coordinated and coherent basis on which the party can build for other topics.

2. The priorities for processing are determined by the approval rate of the topics. If a topic has 86% approval, then this is prioritized over a topic that reached only 82%. This, however, is relativized by the support of the party members. If the central resources are fully utilized and no volunteers work on the preparation of the topic, the 86% topic might get postponed while the 82% topic with more active members can take the next step.

3. Structured discussion of the topic, on the basis of standardized thematic decision templates. All papers should contain in-depth links. Factual claims such as numbers must include a reference to a trustworthy source. Whenever possible a link to the base data must be included. All participants taking part in the creation of the document must disclose in which way and how strongly they could be biased. All users that are able to change the document itself have to register and prove their expertise in the respective areas. At a later stage, different levels of discussion forums can be introduced for troll avoidance. Those would be ‘read-only’ for all members that don’t have at least 10/100/1000 delegated votes on the respective topic. It also might be an interesting idea to split discussion vote delegation from actual voting delegation.[i]

The topic experts among party members are responsible for quality assurance. Everyone must be aware that a six-page presentation of a topic cannot fully reflect it. But even an 80% or 90% solution is far better than anything that today’s policy achieves. The document will include:

The interdependencies are shown in a graphical representation which includes the most important factors and results. This illustrates how individual factors influence the outcome. The limitation to six pages should be a goal but will not always be achievable. This can lead to e.g. a counter-argumentation which is twice as long as the pro-argumentation.

4. During the actual deliberation in the forums with in-depth links, objective and solution-oriented discussions are held. Personal attacks, to be defined in a ‘rule book’’, and other disturbing actions lead to temporary or permanent exclusion from the discussion of this topic. Above all, the rules have to focus on efficiency and a culture of mutual respect and the will to find common ground. Otherwise, this part of the thematic coordination will quickly degenerate into an unproductive shouting game and a lot of work. It can easily lead to a standstill. A potential cure for longwinded unhelpful posts would be to limit the number of words per discussion participant (online discussion) or time (face-to-face discussion). Each member is only allowed to write more if other participants mark her previous contributions as valuable, e.g. new facts introduced, new interdependency established. Contrary to Facebook, you don’t ‘like’ a post but ‘thank a participant for new insights’. By limiting the number of words and activating further contributions only after confirmed added value by other members, participants are forced to prepare a shorter, more precise wording that focuses on valuable new contributions.

5. Adaptation of the draft sketched under Point 3, based on the outcomes of the discussion.

6. Not all members will have interest or time to discuss or vote on all topics. Therefore, a ‘topic-based delegate system’ based on blockchain technology will be established (Liquid Democracy). Here, each party member can delegate his vote completely or for topic areas to another member or group of members. 24 hours before the election date, the election system sends the information on how the delegate vote is used, to the member. The voting delegation can be canceled by the member at any time. The vote on a topic can be overwritten with a personally cast vote at any time.

The vote asks whether the member has read the decision paper (‘yes’ or ‘no’). It is also asking, whether the member’s opinion was influenced by the preparatory paper in such a way that he voted differently than he would have done before reading the document. This is important for an evaluation of the percentage of readers and whether the paper has made a difference in their decisions.

7. Determination of the voting share of the party members and transfer to the elected representatives, e.g. 70% YES /20% NO/ 10% abstention = with 10 deputies seven vote for YES, two for NO, and one abstains.

Distribution of votes according to the preference of representatives. It should be achieved that as many deputies as possible can vote as they would vote on their own initiative. The obligation to vote differently in order to represent the voting weight of the party members as 1:1 as possible is minimized by the vote distribution system. The ‘democratic burden’ is evenly distributed.

8. It is recorded how the individual representatives of that party voted and reconciled with the system’s inputs. The representatives should have voted in exactly the same way as was pre-determined by the weighting of party members and the allocation of the vote distribution system. In the case of roll-call votes, this is officially recorded. In the case of anonymous parliamentary votes, a way is to be found to uncover discrepancies. The party will try to influence parliament to ensure, that in principle, all thematic parliamentary votes are taken by name.

The published thematic decision papers can also be viewed externally. This leads to an increase in the competence of the members of parliament of other parties with regard to the topics and makes the rigid voting of this party as a block more difficult. Parties with a centralist organization could thus come under ‘democratic pressure’. The thematic decision papers are also accessible to citizens. They too can use the well-balanced preparatory papers to read up on the subject briefly and informatively.

Of course, votes of the Proxy Party in parliament could also be allocated more traditionally, as a bloc. The important difference to the normal party: The instruction for the vote would not come from the party leadership, but from the party base. But this traditional procedure would still override many voices by condensing the votes to one unison decision. Therefore, bloc voting is an inferior solution of representation.