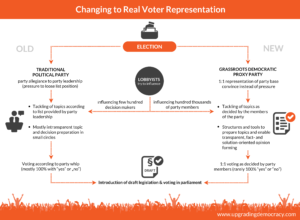 This is part 5 of my “Achieving True Democracy: A New Breed of Party as Realistic Next Step” articles.

Here you can find part 1, the introduction for the article series, and part2, a short description of the idea of the Proxy Party, and part 3, a description of how a party program should look like, and part 4 about finding, prioritizing, and voting on topics.

The benefits of the Proxy Party approach are quite obvious. The direct results are massive improvements in the quality of representation of the citizens and the reduction of corruption:

The greatest benefit of the grassroots democratic approach lies in the far better representation:

It is far harder to convince many hundred thousand party members than a few hundred elected representatives and their staff. There are simply not enough favors to give to all the party members by lobbyists.

The connection between the size of the group to be influenced and corruption is explained in the book The Dictators Handbook. As the size of the group grows, so does the level of corruption shrink. [i] In other words, the introduction of direct democracy would be the optimal strategy against corruption. Another more entertaining way to learn about the topic is an 18-minute video titled “The Rules for Rulers.”

The difference to the old model of political parties and the working and results of the grassroots democratic approach of the Proxy Party can be sketched as follows:

Challenges that affect every democratic system naturally also apply to a grassroots democratic party. By effectively addressing the following challenges, the proxy party can become the most reliable, transparent, and honest party ever:

INEFFECTIVENESS. The party might not be effective to represent its members if special interest groups try to take over the party to drive their specific agenda or ‘suck up too much political energy.’ It will not be effective if it fails to collect well-balanced facts and ensure neutral facilitation of the formation of a political will result in the decision.

INEFFICIENCY. The direct democratic approach is not efficient, as discussing everything with every member is very time consuming and nearly endless. Even if a consensus is reached with the existing members, new members will want to reopen topics and discuss them again. It will not be efficient when loud voices with very articulate opinions drown gentler voices with facts and knowledge.

DECISION MANIPULATION. The decisions of the members can be heavily influenced by those that (a) select the specialists the data is sourced from, (b) gather the facts, (c) prepare the decision paper, and (d) facilitate the deliberation process. Therefore, the Proxy Party needs safeguarded information and democratic processes.

MEDIA. As we haven’t encountered many topics personally, we form pictures of the outside world based on external information. This plays a decisive role in the decisions of the parties’ members. Most of us get informed by mainstream media, far fewer from alternative media. Some use social networks as a filter to be informed about the relevant news. Evermore often, we end up in separate realities [ii] that make it hard to agree on anything.

TECH MANIPULATION. Democracy initiatives worldwide are very skeptical regarding electronic voting systems, and rightly so. In the case of centralized systems, there is a serious risk that they could be hacked. To prevent this, blockchain-based decentralized systems must be used. Manipulation when entering new data (e.g. a vote) into the system must also be prevented. On the other side, the systems need to be easily used so that the hurdle for users is as low as possible to inform themselves, take part in the deliberation process, and vote.

The rest of this short book tries to find approaches to tackle the above-mentioned weaknesses and enlarge the chance for a direct democratic party to be successful.